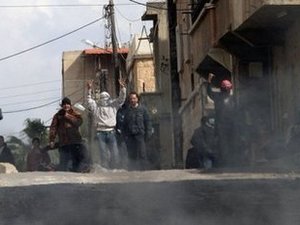 A total of 17 people were killed Friday when a demonstration headed to the Syrian protest city of Daraa was raked by gunfire, a human rights activist said.

"Seventeen protesters were killed in a shooting in the village of Sanamen as they were headed toward Daraa," a tribal town 100 kilometers south of Damascus, he told Agence France Presse, requesting anonymity.

The news could not be confirmed by independent sources or hospitals in the area.

The Daraa-based activist said security forces on Friday also opened fire on protesters who gathered near the home in Daraa of the town governor, who was fired from the post earlier this week.

Activists have accused security forces of killing more than 100 people on Wednesday alone in the town, which is home to some 75,000 people.

Journalists on Friday were asked to leave Daraa, a tribal town near the Syrian-Jordanian border, shortly before the funerals of two people killed in a shooting on protesters earlier this week.

One resident, contacted by telephone, said residents had gathered for the burials and marched toward the cemetery, chanting: "With our souls, with our blood, we will sacrifice for our martyrs."

AFP reporters saw soldiers deploy on the roads leading to Daraa, bringing with them sandbags, as they were escorted out of the town.

Earlier Friday, protests spread from their southern epicenter of Daraa to Damascus and a town south of the capital, where authorities moved to arrest at least five demonstrators.

Hundreds of people marched from Omayyed mosque in the center of Damascus' Old City along Souk Al-Hamadiyeh Street chanting: "Daraa is Syria" and "We will sacrifice ourselves for Syria."

At least five people were taken away by police in plain clothes, according to an AFP correspondent.

In Daeel, south of Damascus and about 30 kilometers north of Daraa, 300 people marched preceded by motorcycles, shouting: "Daeel and Daraa will not let themselves be humiliated."