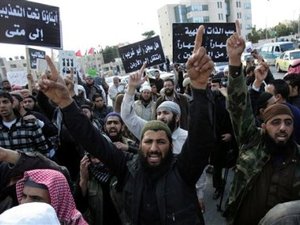 More than 100 people were injured Friday as pro-reform protesters and government supporters clashed in Amman, prompting police to use water cannons to disperse them.

Anti-riot police also broke up a protest camp for students and arrested several of them, a security official told Agence France Presse.

"There are more than 100 people injured, including policemen. Two of the injured are in critical condition," a medical source at the scene said.

An AFP journalist at the scene said police used water cannons to break up clashes between the students protesting to demand reforms and government supporters.

The clashes erupted after around 200 government supporters hurled large stones at more than 2,000 young demonstrators from different movements, including the powerful Islamist opposition, took part to call for reforms to the current regime and more efforts to fight corruption, an AFP journalist reported.

Spots of blood marked the location of the demonstration next to Amman's Interior Circle, or Gamal Abdel Nasser Square.

The demonstrators had complained that "our gathering is peaceful, but this did not prevent the attacks".

"Does the king agree with such actions? We are Jordanians and we have the right to express ourselves," said Reda Darwish, 20.

At nightfall on Thursday, police attempted to disperse the youths, cutting off electricity to the square around 11:00 pm (2100 GMT), an AFP journalist witnessed.

Protesters said around 50 "loyalists" attacked them with rocks after the power supply was lost, adding that police who surrounded the scene did not intervene.

"We hold the interior minister responsible for this incident and we call on the king and the people to protect us from these thugs who are attacking us," said Nihad Zuhair, another protester.

The students want corrupt officials to be put on trial and security services to stop interfering in their affairs.

"The revolution is happening all around us," they shouted. "Jordan, your turn is coming."

"We want constitutional amendments to have parliamentary governments," said Alaa Fazaa of the Jayeen (We are Coming) group, adding the protests would go on until their demands were met.

The protesters, including some expatriates, have created "committees" to clean up the location and provide food, water and beverages as well as medical care to each other.

"I am here today to express solidarity with the Jordanian people and back democracy and justice," Lise Olivarius, 25, of the ActionAid international charity, told AFP.

Since January, leftwing activists have joined forces with nationalists and the Islamist opposition in calling for far-reaching political reforms and an end to what they say is rampant corruption.

More than 200 supporters of the Islamist movement and other groups demonstrated after Friday midday prayers near the Israeli embassy to push reforms and mark the 43rd anniversary of the Battle of Karameh with the Jewish state.

"The government and the regime should realize that time is not on their side and it is on the country's side," Said Diab, leader of the Jordanian Popular Unity Party, told AFP as the protesters called for the expulsion of Israel's ambassador to Amman.

Elsewhere, thousands gathered in Al-Hussein Gardens west of Amman to express loyalty and allegiance to the king, dancing to national songs and waving large national flags and pictures of the monarch.