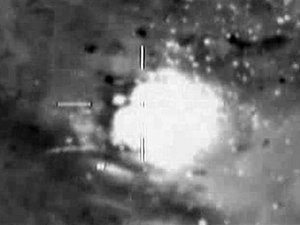 Huge explosions shook a military site in an eastern suburb of Libya's capital early Saturday as Western forces piled pressure on Colonel Moammar Gadhafi with a barrage of air strikes.

The blasts, on the eighth day of a Western bombing campaign to halt attacks by Gadhafi's forces on civilians, left a radar facility in flames in Tajura, home to several military bases, a witness told Agence France Presse.

"The district was shaken by three explosions in succession," the resident said, adding that the explosions had shattered windows.

"The raid targeted a military radar site which is still on fire," the resident, who lives close by, added.

U.S. officials said the relentless pressure on Gadhafi and his allies was beginning to take its toll, and that the veteran Libyan leader was arming volunteers.

"We've received reports today that he has taken to arming what he calls volunteers to fight the opposition," said U.S. Vice Admiral William Gortney.

Until now, Gadhafi is believed to have relied on militias run by his sons as well as African mercenaries to fight poorly-armed but determined opposition forces.

Gadhafi "has virtually no air defense left to him and a diminishing ability to command and sustain his forces on the ground", said Gortney following the U.N.-mandated air strikes launched on March 19 by the United States, Britain, and France.

"His air force cannot fly, his warships are staying in port, his ammunition stores are being destroyed, communications towers are being toppled, his command bunkers rendered useless," Gortney said.

Western forces also pounded several key cities and towns overnight, including Ajdabiya, where regime loyalists have dug in and been accused by residents of brutalizing the population.

Plumes of smoke filled the sky over Ajdabiya on Friday as the air strikes escalated, forcing terrified residents to flee the strategic coastal city, 160 kilometers south of the eastern rebel stronghold of Benghazi.

"We entered the town," Colonel Mohammed Ehsayer, who defected from the army to join the rebellion against Gadhafi, told AFP at a rebel outpost a few kilometers east of the city.

"Soon the eastern and western gates (entry roads) will fall," he said referring to positions still in loyalist hands, with the uprising now in its fifth week.

Gadhafi forces opened up with artillery on the rebel city of Misrata, 214 kilometers east of Tripoli, killing a mother and her four children late Friday, a witness told AFP.

"The artillery shelling has been going on since Thursday night," said the witness contacted by telephone. "They are firing on everything that moves."

"There is no water, no electricity and supplies are running short," in Misrata, Libya's third city, he said, adding residents were cowering indoors.

U.S. warships and submarines had fired 16 new Tomahawk cruise missiles at Libyan targets in the 24 hours to 0500 GMT Friday, the Pentagon said, adding that coalition warplanes carried out 153 sorties over the same period.

The total number of Tomahawks launched at Libya rose to at least 170.

Gadhafi also appeared to be showing signs of strain as his key allies put out feelers to mediators, possibly over an exit strategy.

"It's clear that the regime is reaching out to several possible mediators, interlocutors to try to get a message across," Gene Cretz, the recently withdrawn U.S. ambassador to Libya, told reporters.

"I'm not exactly sure what the message is, but it clearly indicates, I think, at least some kind of desperation, I think, at this point," Cretz said.

The Washington Post reported Saturday that the United States and its allies were considering supplying weapons to the Libyan opposition.

The Pentagon said 12 countries were now taking part in the coalition seeking to enforce the no-fly zone, including Qatar and the United Arab Emirates.

Qatar became the first Arab nation to take part in the military campaign, with two of its Mirage fighter jets carrying out "air interdiction mission," its air force and the French military said on Friday.