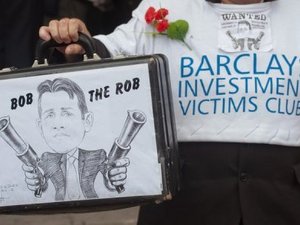 Moody's on Thursday cut its outlook on Barclays' financial strength rating to "negative" from "stable" after the British bank's top executives resigned this week over an interest rate rigging scandal.

"Moody's Investors Service has today changed the outlook on the C-/baa2 standalone bank financial strength rating (BFSR) of Barclays Bank Plc to negative from stable," the ratings agency said in a statement.

The decision reflects "concerns that the senior resignations at the bank and the consequent uncertainty surrounding the firm's direction are negative for bondholders."

It added that the A2 long-term and Prime-1 short-term debt ratings remained unchanged.

"The A2 senior debt and deposit rating already has a negative outlook due to Moody's expectation that the UK government will reduce its support for large UK banks over the medium term," it also noted.

Moody's said that Barclays' senior debt and standalone ratings "could experience further downward pressure if the bank proved to be unable to restore a stable management structure over the coming months."

It added: "Given the negative outlook, any upward ratings movement is currently unlikely; however, the standalone rating could be stabilized if Barclays ... restores a stable management structure."

The 60-year-old stepped down from the top post on Tuesday over the affair which has also seen Barclays chief operating officer Jerry del Missier and chairman Marcus Agius quit.

Last week, the bank was fined £290 million ($452 million, 360 million euros) by British and U.S. regulators for the attempted rigging of the Libor and Euribor interest rates.

Libor (London Interbank Offered Rate) is a flagship London instrument used as an interest benchmark throughout the world, while Euribor is the Eurozone equivalent.

The rates play a key role in global markets, affecting what banks, businesses and individuals pay to borrow money.