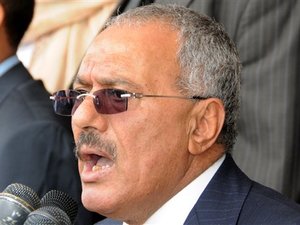 The party of Yemen's embattled president has rejected protester demands for him to resign as "unacceptable," while blaming the opposition for raising tensions, Saba state news agency reported Saturday.

President Ali Abdullah Saleh, in power since 1978, has faced mounting pressure to leave office from continuing protests against his rule, and defections by top military, tribal and religious leaders.

"It is unacceptable and illogical to override the constitutional legality or for the minority to impose its will on the majority of the people," the General People's Congress party said according to Saba.

A Friday meeting of the party's top decision-making body was spent "reviewing the obstinate position of the (Islamist) Al-Islah party and its allies... which have closed the door for dialogue and sought escalation," Saba said.

It also said that three million people turned out on Friday to express their support for the embattled Saleh.