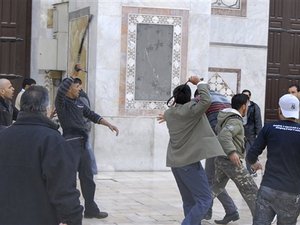 Protesters in Syria vowed to hit the streets on Saturday, despite a rising death toll in demonstrations that have put President Bashar al-Assad under unprecedented domestic pressure.

A Facebook group that has emerged as the motor behind a string of demonstrations that have surfaced in Syria this month drummed up support for more rallies on Saturday, the morning after more than a dozen died in protests across the country.

"Today, Saturday... popular uprisings in all Syrian governorates," read a posting on The Syria Revolution 2011, which has garnered the support of over 86,000 fans.

The call for fresh protest in Syria, which has been ruled by the Baath party for close to 50 years, came one day after at least 13 people were killed in clashes between demonstrators and security forces in a Damascus suburb, Homs and the country's south.

An unnamed Syrian official put Friday's toll at 13, including two firemen, but activists said at least 25 people were killed on the Muslim day of prayer and rest.

Amnesty International on Friday reported 55 people had been killed during a week of unrest in and around Daraa, a tribal town close to Syria's southern border with Jordan.

Protests demanding major change spread across Syria on Friday despite an official announcement of a series of reforms, including the release of all activists detained this month and plans to "study" ending emergency rule which has been in place since 1963.

Daraa has emerged as the hub of the protests and has sustained the most casualties.

The Daraa demonstrations have turned increasingly angry, with demonstrators tearing down a statue of late president Hafez al-Assad, father of Bashar, and burning the home of the governor, who had been fired from his post.

While protests in the capital have largely been contained, hundreds of protesters marched Friday from the landmark Omayyed mosque through Damascus' Old City chanting "Daraa is Syria" and "We will sacrifice ourselves for Syria" before police moved in.

Assad supporters shouted back: "God, Syria and Bashar, that's all" as convoys in support of Assad took to the streets.

At least five protesters were taken away by officers in plain clothes, according to an AFP correspondent.

Thousands of Assad supporters took to the streets of Damascus Friday night by foot and in cars and buses, chanting their loyalty to the Baath party and the Assads in counter-protests that continued into the early morning.

Syrian authorities' crackdown on the protests has also drawn harsh rebukes from the United Nations, France, Britain, the United States, which has issued the latest of an almost daily string of condemnations.