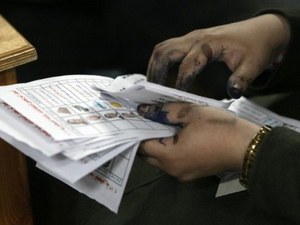 A fire ravaged a depot containing electoral material in the eastern Libyan city of Ajdabiya, an official of the national electoral commission said on Thursday.

"The fire happened before sunrise. All the material, including ballot boxes and ballots, was destroyed," said the official, adding that the cause of the fire was unknown.

But he said backers of federalism, some of them armed, "had tried to attack the depot yesterday (Wednesday) and residents of the city parried the attack by forming a human shield around the warehouse."

The head of the electoral commission in Benghazi, Jamal Bugrin, confirmed the information, warning that "if a solution is not found today (Thursday) to replace the material, voting would have to be delayed in that district."

The incident comes just two days ahead of elections for a General National Congress, in what marks the first national poll after 42 years of dictatorship under slain leader Moammar Gadhafi.

The district of Ajdabiya has been allocated four seats in the 200-member national assembly due to be elected on Saturday.

On July 1, the electoral commission's headquarters in Benghazi were attacked by armed men calling for a reallocation of seats on the national assembly, which will govern during a transitional period.

A federalist movement calling for greater autonomy of the east has threatened to boycott and disrupt the elections if its demands to change the allocation of seats are not met.

The movement would like an equal allocation of seats along regional lines. The interim authorities instead decided to allocate 100 seats to the west, 60 to the east and 40 to the south, citing demographic considerations.