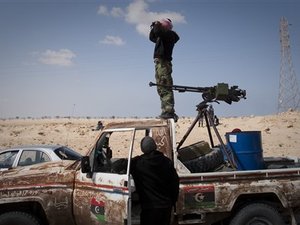 Libyan rebels seized control of the strategic oil town of Ajdabiya on Saturday, marking their first significant victory over Colonel Moammar Gadhafi's forces since the start of the Western air strikes a week ago.

The rebels, backed by a barrage of Western bombardment, powered into the town, leaving a trail of destroyed tanks and military vehicles along the road, Agence France Presse correspondents at the scene reported.

The bodies of at least two pro-Gadhafi fighters lay on the ground, surrounded by onlookers taking photos, while a mosque and many houses bore the scars of heavy shelling as the rebels celebrated, firing shots into the air and shouting "God is greater."

Regime loyalists had dug in after turning back from the road to Benghazi following the first coalition air strikes. They were accused by residents of brutalizing the population.

Resident Ibrahim Saleh, 34, told AFP: "The tanks were firing on the houses non-stop. I couldn't move from my house for days. There was no water or fuel or communications, and when people went out even to get fuel they were fired on.

"The coalition air strikes were yesterday and the day before. They attacked from the skies and the revolutionaries came in afterwards and freed the city," he said.

Ajdabiya is the first town to fall back into rebel hands since a coalition of Western forces launched U.N.-backed air strikes on March 19 to stop forces loyal to Gadhafi attacking civilians.