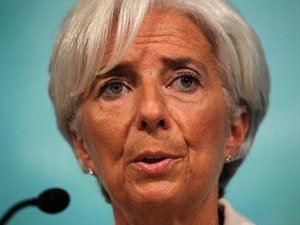 During a speech in Tokyo, Lagarde cited measures adopted after a European leaders' meeting in Brussels last week and the European Central Bank's move on Thursday to cut interest rates to historic lows as proof of progress.

But "from the IMF perspective, we believe that more needs to be done in order to complete (the reform)".

"It's also a question of implementation -- diligent, rigorous, steady implementation," she told an economic symposium in the Japanese capital during a week-long Asian tour.

Stimulus measures and emergency aid to troubled Italy and Spain, which EU leaders agreed on following the Brussels talks, were "significant steps in the right direction to address the immediate crisis, which is encouraging", Lagarde said.

On Thursday, central banks in Europe and China ushered in easing and stimulus in a bid to help power the global economy; just days after the IMF pared its growth forecast for the U.S. economy.

The Washington-based IMF also warned that the Obama administration could be slicing the deficit too fast for the weak economy, a so-called "fiscal cliff".

The IMF estimated 2012 U.S. economic growth at 2.0 percent, down from April's forecast of 2.1 percent for the world's biggest economy.

On Thursday, Beijing's second interest rate cut in less than a month surprised markets and stoked worries about the world's second-biggest economy.

Then, the European Central Bank cut its main interest rate to a record low 0.75 percent, while the Bank of England kept its rate even but announced £50 billion ($78 billion) in additional stimulus.

Lagarde will be in Jakarta on July 8-10 and in Bangkok on July 11-12, where she will participate in a seminar organized by the IMF, the Bank of Thailand and the Asian Development Bank.