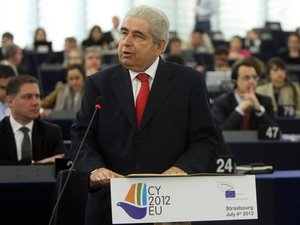 Russia said Friday it was studying a new five-billion-euro ($6.2-billion) loan request from Cyprus that it needs to shore up its struggling banks from financial turmoil rocking nearby Greece.

Finance Minister Anton Siluanov confirmed that the assistance package was separate from one he said the Mediterranean island nation had also made from the European Union in hopes of injecting its finance system with cash.

"We have received the request," news agencies quoted Siluanov as saying.

"The European Union is studying (their request), and we are studying" the other one, the minister remarked.

Siluanov added that Russia would take the European Union's decision into consideration when making a final decision on its own loan.

"This will be taken into account," he said without giving further details.

Cyprus has close business relations with Russia and remains one of its largest direct investors because of the money placed in its finance houses by various post-Soviet tycoons.

Analysts note a particular interest by Moscow in making sure that Cyprus does not fail and deprive the Russian authorities with the cash needed to help pursue their stalled efforts and modernization and diversification of oil exports.

Cyprus has failed to estimate how badly its banks have been exposed to bad debts from Greece. Local media speculate the figure could be close to 10 billion euros.