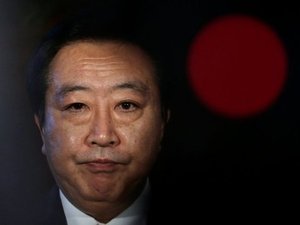 Japan is considering buying a chain of islands at the center of a bitter territorial dispute with China and Taiwan, Prime Minister Yoshihiko Noda said Saturday.

The move could potentially reignite tensions with both Beijing and Taipei, which also claim the islands in the East China Sea, called Senkaku in Japanese and Diaoyu in Chinese.

"There is no question that the Senkakus are an integral part of our country's territory," Noda told reporters. "There exists no territorial issue or the ownership issue as Japan is in effective control of the islands."

"From the viewpoint of how to maintain and manage the Senkakus in a calm and stable manner, we are making comprehensive studies on the matter by keeping in touch with the owner," he said.

The prime minister's comments come after a report in the Asahi Shimbun said the government on Friday informed Tokyo's governor Shintaro Ishihara of its plan to buy three of the islands from their private Japanese owner.

In April, Ishihara announced he was in talks to buy the three islands -- Uotsurijima, Kitakojima and Minamikojima -- claiming that Japan was not doing enough to protect the territory.

The influential daily said senior government officials were already negotiating with the owner, the Kurihara family, hoping to finalize the nationalization plan by the end of the year.

He has already collected more than 1.3 billion yen ($16.3 million) in donations from across the country to fund the purchase, the report said.

The island chain, which lies in rich fishing grounds and may harbor valuable mineral reserves, was bought by the Kurihara family decades ago from descendants of the previous Japanese owners.

The islands were inhabited by Japanese fishermen before the end of World War II.

The waters around them have been the scene of territorial spats including the arrest of a Chinese trawlerman in late 2010 when he rammed his boat into two Japanese patrol boats.

On Thursday, two Japanese nationals swam to Kitakojima and stayed there for 90 minutes, the coastguard said.

Earlier this week Taiwanese vessels brushed against Japanese patrol ships in waters near the islands.