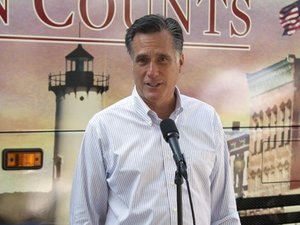 The wave of advertisements, which roll out on July 10 and run through early August, begins with a spot called "Excuses," which focuses on the disappointing report released Friday that shows poorer-than-expected U.S. jobs growth and a stagnant unemployment rate of 8.2 percent.

"Barack Obama's got lots of excuses for the bad economy," says the voiceover in the ad, which shows Obama mentioning everything from "headwinds coming from Europe," to the earthquake and tsunami in Japan.

"Excuses," announced just hours after release of the jobs data, will air in Colorado, Florida, Iowa, Michigan, North Carolina, New Hampshire, Nevada, Ohio and Virginia. Many experts consider all nine states to be toss-ups in the November election.

"We're suffering through one of the weakest economic recoveries in our history and the only thing President Obama is offering is slogans and excuses," Crossroads GPS president Steven Law said in a statement announcing the ad buy.

"People are hungering for practical solutions to our skyrocketing debt and flat-lined economy, and that's what we are putting forward in our 'New Majority Agenda.'"

Under its particular non-profit status as a group promoting social welfare including public policy advocacy, Crossroads GPS must report what it spends but is not required to disclose its donors.

Democrats have openly worried that such organizations, while they cannot funnel funds directly to candidates, will swamp the 2012 campaign with hundreds of millions of dollars of undisclosed money that will be used for negative ad campaigns, grassroots projects and get-out-the-vote operations.

Crossroads GPS and its sister group American Crossroads are expected to spend some $300 million in the 2012 election, according to the Washington Post.