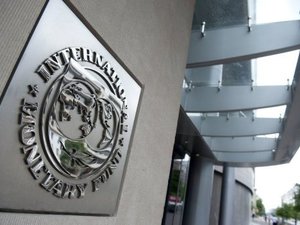 The International Monetary Fund again urged Ukraine Friday to raise gas prices for consumers, a sticking point in the resumption of an IMF bailout.

Ukraine's strong economic recovery in 2010-2011, following a global crisis, was slowing under pressure from lower demand for its exports and slow credit growth, the IMF said in an annual review of the economy.

According to IMF projections, growth will slow to 3.0 percent this year after a 5.2 percent expansion in 2011.

The IMF directors "urged the authorities to gradually increase gas and heating tariffs and enhance payment compliance," the global lender said in a statement.

"A comprehensive reform of the energy sector is critical to reduce the strain on the budget and gain energy independence."

The IMF has prescribed this move a number of times, but Ukraine has firmly rejected it. According to Ukrainian authorities, the disagreement over gas prices is the stumbling block to resumption of aid.

Dissatisfied with the country's pace of reforms, the IMF has disbursed only $3.4 billion in aid to Ukraine under a $15.3 billion program standby loan launched on July 29, 2010. The program is due to expire at the end of 2012.

In the statement issued Friday, the IMF made no mention of a resumption of the bailout and did not directly address the contentious issue.

The IMF executive board "welcomed the progress" Ukraine had made since the 2008-2009 global crisis, including a rebound in growth, a decline in inflation and in the government deficit, and reforms in pension law and tax codes.

It also said the country's banking sector reforms have "advanced" but balance sheets remained weak and "exposed to currency movements."