Donors to Pledge over $16 Bn for Afghanistan 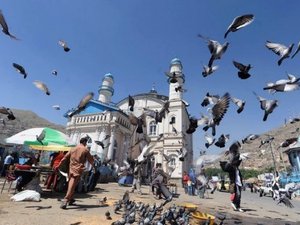 Japan, which will co-chair the one-day conference on Sunday with Afghanistan, will provide up to $3 billion for the five years to 2016, in addition to $1 billion for the war-torn nation's neighboring states, he said.

The total pledge of more than $16 billion will include part of the aid to be declared by Japan.

"This scale of pledge will satisfy the fiscal gap that the World Bank and the Afghan government have said would be needed for the development of the country," he said.

Afghan President Hamid Karzai, who will be in Tokyo along with U.S. Secretary of State Hillary Clinton and United Nations chief Ban Ki-moon, has called for $4 billion a year in civilian aid.

Afghanistan fears donations could dry up when NATO pulls out in 2014, with the focus of the Tokyo meeting set on whether the international community will stay committed to supporting the country in the years after foreign combat forces leave.

"Japan should contribute to making a systematic framework which will cover the so-called 'Transformation Decade' after 2015," Gemba said.

Clinton announced the move, which provides a long-term framework for security and defense cooperation, during a brief visit to Kabul where she had a breakfast meeting with Karzai.

"We see this as a powerful symbol of our commitment to Afghanistan's future," Clinton said at a news conference after talks in Kabul with Karzai.

Tens of billions of dollars have poured into Afghanistan since the U.S.-led invasion that toppled the Taliban in late 2001, but graft is rife from local police to high officials, and patience among donor countries is wearing thin.

A principle of "mutual accountability" will be stressed at the more than 70-nation meeting, making continued payment of aid conditional on Kabul making progress, particularly on transparency.

German Foreign Minister Guido Westerwelle, visiting Tokyo for the conference, met Gemba on Saturday and stressed that Afghanistan will need to help put its own house in order.

"This meeting aims to help the Afghanistan side also make progress in areas of good governance, fight against corruption and more transparent domestic condition, as well as measures to address the drug issue," he told reporters.

Ministers from Britain, France and Australia, as well as India, Pakistan and Iran, will also be present alongside envoys from countries including Russia, Saudi Arabia, Qatar, China and South Korea.

After more than 30 years of war, the Afghan economy is weak and the country cannot survive without foreign aid. According to the World Bank, spending on defense and development by donors accounted for more than 95 percent of GDP in 2010-11.

Without a functioning economy, Kabul covers only $2 billion of the $6 billion it spends each year not counting security costs, said a Western diplomat, with donor countries making up the difference.