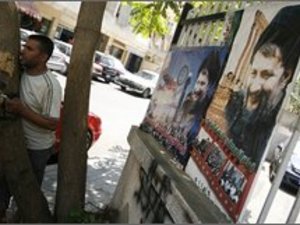 A delegation from Syrian intelligence services was recently dispatched to Tripoli to scrub the Libyan intelligence archives clean of all the records detailing past projects that the two countries had collaborated on, the ‘Weekly Standard’ U.S. magazine reported.

It said one Arabic-language website claimed that former Syrian vice president Abdel-Halim Khaddam was involved in the disappearance of Imam Moussa al-Sadr, the Iranian-born Lebanese cleric who went missing in Libya in 1978.

A discovery that Syria really was complicit in Sadr’s death could cause Bashar Assad’s regime some trouble with Lebanon’s Shiite community, which revered the cleric, the report said.

Syria can hardly afford to alienate the Shiites, it added.

A Khaddam associate who worked in the Syrian regime at high levels, Bassam Bitar, told the magazine that Khaddam warned Sadr not to go to Libya. “Khaddam always thought (Moammar) Gadhafi was crazy and thought something could go wrong, but Sadr went anyway because he needed Gadhafi’s money for his projects.”

The point of contention between Gadhafi and Sadr was that the Libyan leader wanted the cleric to use Libyan funds to support the Palestinian resistance against Israel, but Sadr was using it instead to build up the impoverished Shiite community in southern Lebanon. “The two started to argue and it got out of hand,” says Bitar. “Gadhafi told his officers to ‘take him away,’ which they interpreted as an order to kill him and his two associates.”

When Gadhafi asked the next day where Sadr was and discovered he had been killed, he had his officer killed. “Gadhafi didn’t want to have any troubles coming from killing Sadr,” says Bitar. “He called the Syrians in a panic to ask for advice, and it was Damascus that told him to concoct the story that he (Sadr) was last seen leaving Libya for Italy, where he supposedly disappeared.”