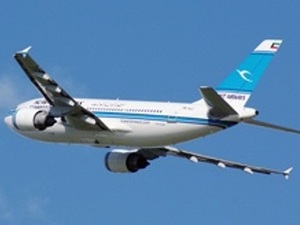 Othaina told Al-Rai newspaper that "initially three to five planes" would be grounded this week "in prelude to take new decisions to ground further aircraft."

The state-owned carrier has a fleet of 15 Airbus and two Boeing aircraft that were acquired about 20 years ago and have encountered many technical problems in the past few years.

"Safety conditions have deteriorated because of repeated malfunctions in some planes which necessitated taking such a decision," said Othaina, who is also Kuwait's communications minister.

His comments came as media reported Sunday that a KAC flight from Kuwait to Jeddah in Saudi Arabia narrowly escaped disaster after one of its engines burst and a second broke down.

The Airbus A300 with 186 passengers on board made an emergency landing Wednesday in the city of Medina, the latest of a series of reported breakdowns in the KAC fleet.

Kuwait's parliament passed a law in January 2008 to privatize the loss-making carrier but the government in October put the brakes on the plan and agreed instead to restructure KAC after private buyers offered a low price.

International firms have valued the assets of Kuwait Airways at 220 million dinars ($800 million).

The government sent a new draft law to parliament in June proposing to delay the privatization plan for at least three years during which 10 new aircraft will be purchased and the government would pay the carrier's deficit.

Parliament did not discuss the new draft bill because it was scrapped in a constitutional court ruling that also reinstated the previous parliament, citing flawed procedures.

The airline's privatization law stipulates the sale of 35 percent of the company to a strategic investor and 40 percent to citizens in an initial public offering.

Kuwait Airways has posted a loss in all but one of the past 21 years, amounting to more than $2.7 billion. Losses are paid by the state because the carrier is entirely government-owned.

This is a Super Jumbo which is a brand new plane. Please put a plane that is aging and from Kuwaiti Airlines.