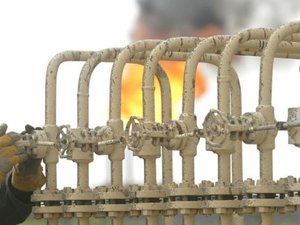 Iraqi Kurdistan has begun sending oil produced in its three-province autonomous region out of the country without the express permission of the central government, an official said on Sunday.

The central government in Baghdad, meanwhile, insisted that it reserved the sole right to export oil, which accounts for the lion's share of the country's income and is at the center of a dispute between the capital and Kurdistan.

He said the crude was being exported to Turkey so it could be refined into various products before being brought back to Kurdistan.

"If we need to, we will export oil to Iran," Abubaqr added. "We will continue exports of crude oil until the central government provides the region with oil products."

"The central government has pushed us to do this."

Kurdish officials say the central government has barred the dispatch of petroleum products to the northern region, but the oil ministry in Baghdad has persistently denied those allegations.

"Only the oil ministry of the government in Baghdad has the right to export oil or oil products."

A dispute over oil between Baghdad and the Kurdish government in Arbil has worsened in recent months, with Kurdistan looking to ramp up oil production and export capabilities, and the region has also cut off oil exports to Iraq in a payment row.

Arbil has signed dozens of contracts with foreign oil firms aimed at boosting its oil sector in recent year, but the central government, which says all oil contracts must go through Baghdad and regards any that do not as illegal, has strenuously opposed such deals.