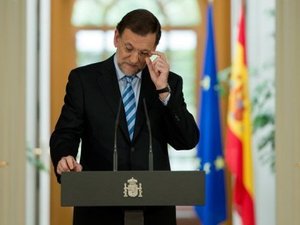 Eurozone finance ministers will oblige Spain's battered banks to further boost the share of rock-solid core capital on their books at a meeting Monday, the daily El Pais said.

"All Spanish entities will have to raise their high quality 'core capital' to nine percent," the daily said, citing European sources with knowledge of the negotiations.

So far, only the biggest Spanish banks have had to keep such a high ratio of core capital as a proportion of total assets.

The meeting in Brussels is to discuss details of a Eurozone rescue loan of up to 100 billion euros ($125 billion) to salvage Spain's banks, laden with loans that turned bad after a 2008 property market crash.

It comes as investors show deep misgivings about Spain's finances despite the banking rescue.

A European Union summit from June 28-29 had been hailed as a breakthrough for promising a Eurozone bank union to keep the lenders in line and making it easier for the bloc's new bailout fund to help states in trouble.

But investors' concerns have returned, in part because of doubts over the details and timetable for implementing the banking rescue and the sweeping EU summit agreements.

Prime Minister Mariano Rajoy has warned that his country cannot afford to finance its operations at such high interest rates over the long term, raising the specter of an all-out state bailout.

Link Securities said it seemed that the EU summit agreements would be respected.

That would allow EU rescue mechanisms to pump rescue loan money directly into Spain's banks without adding to the nation's fast-rising sovereign debt, it said.

It also would ensure that the EU rescue mechanism does not take priority over other lenders for repayment in the case of a Spanish default, a prospect that had unnerved potential investors, Link Securities said.

"Now they have to decide when and how this plan will be implemented, and what will be asked in exchange," it said.

"One of the non-negotiable conditions imposed by the 'men in black' is the creation of a 'bad bank'," which would pool all the toxic property-related loans, said business daily Expansion.