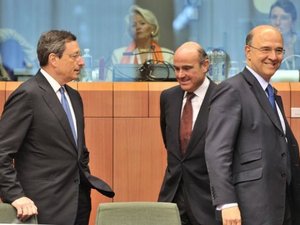 Eurozone finance ministers agreed Tuesday to offer Spain 30 billion euros this month to help its distressed banks as they raced to stay ahead of market skepticism.

After nine hours of talks, Jean-Claude Juncker, the Luxembourg premier who also heads the Euro group , said a memorandum of understanding for Spain would be formally signed "in the second half of July," with 30 billion euros ($37 billion) available by the end of the month.

Juncker, who has been in the job since 2005, was reappointed by the 17 ministers during talks Monday which ended well after midnight.

Spain, under increasing pressure as skeptical markets pushed its borrowing costs dangerously high again, had called for up to 100 billion euros in direct aid at a June 28-29 "breakthrough" EU summit.

Aiming to keep the momentum going, ministers also agreed to extend a deadline for Spain to cut its public deficit to the EU 3.0 percent limit by one year to 2014 because of the difficult economic conditions Spain faces.

At the same time, however, Juncker stressed that Madrid must implement measures needed to bring its public finances into line with EU norms.

EU economic affairs commissioner Olli Rehn said Spain's public deficit -- the shortfall of revenue to spending -- was now expected at 6.3 percent of Gross Domestic Product this year, 4.5 percent in 2013 and then 2.8 percent in 2014.

Spain in May revised its 2011 public deficit figure, saying that it stood at 8.9 percent, up from 8.51 percent reported earlier and way above the original 6.0 percent target for the year.

Spanish Prime Minister Mariano Rajoy announced on Saturday that he would take additional steps soon to cut the public deficit and said "Europe must fulfill the accords as swiftly as possible."

Juncker, widely seen as one of the founding fathers of the euro, confirmed he would stay on as head of the Eurogroup but would not serve a full two-and-a-half year term, expecting to step down early next year.

In another key appointment, Germany's Klaus Regling, head of the Eurozone’s temporary EFSF bailout fund, was named to run its permanent successor, the European Stability Mechanism.

The June summit agreed that the ESM will be able to inject funds directly into needy banks, conditional on a new European bank regulator being put in place, so as to avoid adding to the debt burden of the affected state.

Asked if such a state would have to provide guarantees on such bank funding, Juncker answered with a simple "No."

Rehn confirmed that position, a key issue for nervous investors, but also highlighted the importance of getting the new regulator -- to be built around the European Central Bank -- in place quickly.

The European Financial Stability Facility (EFSF) was set up in 2010 after a first Greek bailout but it became clear after Ireland and Portugal also had to be rescued that a more powerful backstop was needed.

The ESM has funds of 500 billion euros and was supposed to be operational from this month but it has been delayed, with final ratification still pending in several member states.

French Finance Minister Pierre Moscovici said the meeting had been able to make progress on several fronts and had established a heavy timetable through to the end of the year.

ESM direct funding for struggling banks will "allow us to tackle the roots (of the debt crisis) by breaking the link between the banking crisis and the sovereign debt crisis," Moscovici added.

The Spanish bank accord should be concluded by end-July and ultimately run up to 100 billion euros, he said, also highlighting the need for Madrid to implement tough reforms of the sector.

Juncker and Rehn said the meeting had also discussed the situation in Greece, taking note of what its newly elected government has planned, and had also reviewed the position in Cyprus, which has just asked for EU aid.

Cyprus, current holder of the EU's rotating presidency, blames its problems on its banks' heavy exposure to Greece, and its aid program is expected to be completed by September.

The June summit pledges to help Spain's banks, set up a new banking regulator and ease the way for the ESM to play a greater role, were hailed as a "breakthrough" which sparked sharp market gains.

But in the past week, sentiment has turned negative again, with analysts dismissive and expecting little follow-up to sustain the summit momentum.