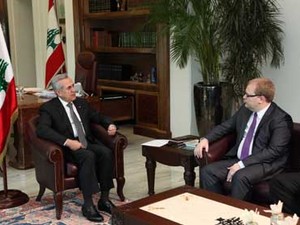 He called for the cooperation of the European Union and neighboring countries in the probe. Estonia has already said that it is receiving logistical support from France and Turkey, and that the Palestinian Authority has also offered its help.

"We have no information about where they are and who abducted them," Paet told Estonian public television before heading to Beirut. "Fragments of information have been collected, but there is no information that would lead to a positive outcome.”

Meanwhile, al-Akhbar daily said that Lebanese authorities are searching for an Estonian woman who gave her testimony on the kidnapping of the seven tourists and later disappeared.

Al-Akhbar said that intelligence services issued an advisory two days after the seven men were kidnapped to search for the woman and arrest her.

A source involved in the investigation refused to name the woman or unveil whether she was still in Lebanon.

The source told al-Akhbar that the woman had stayed in the Lebanese mountainous town of Broummana rather than head to Syria with the seven Estonians.

The tourists were snatched from their bicycles close to the Bekaa valley town of Zahle Wednesday evening, hours after entering Lebanon from Syria, via the Masnaa border crossing.

Following their disappearance, suspicion fell on the Popular Front for the Liberation of Palestine-General Command (PFLP-GC), which has bases close to the Syrian border. The group immediately denied carrying out the kidnapping.

But now the investigation is also focusing on the possibility that the men were taken to Syria immediately after their abduction.