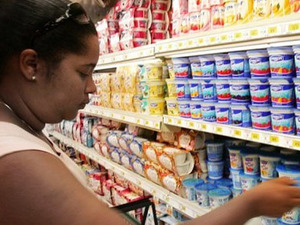 Global drinks and snacks giant PepsiCo said Monday it will enter the fast-growing U.S. yogurt market this month, teaming up with a German dairy company to introduce premium European products.

The yogurt roll-out marks the first time either company has offered dairy products in the world's largest economy.

The U.S. yogurt market is booming, with brands and types proliferating in store dairy aisles as part of growing consumer demand for natural foods.

"As we've seen through the success of our dairy business in other parts of the world, this is a category with strong growth prospects," said Mehmood Khan, PepsiCo's chief scientific officer, global research & development.

"Mueller makes some of Europe's most delicious and unique dairy products, and there is no better partner PepsiCo could have in order to meet historic U.S. consumer demand for premium yogurt."

Khan said the new brand line will offer U.S. consumers a range of products, including Greek-style yogurt, that "are unlike anything on the market currently."

The venture, Mueller Quaker Dairy, is set to enter the premium yogurt sector in mid-July in the Northeast and middle-Atlantic states.

Mueller Corner and Muller Greek Corner varieties will include Blueberry, Honeyed Apricot, Crispy Crunch and Choco Balls. The Mueller FruitUp varieties will feature fruit on top of the yogurt.

PepsiCo said it saw strong growth potential in the U.S. market, which has lagged behind other regions, especially Europe, in variety and innovation in dairy products.

U.S. consumption of yogurt and other value-added dairy products is generally less than half that of Europe, the Purchase, New York-based firm said, citing Euromonitor 2011 data.

The Mueller brand, originating from the Mueller family dairy farm in Bavaria, has been producing yogurt and other products for more than 100 years.

Headquartered in Luxembourg, Mueller is a holding company whose subsidiaries include the multinational dairy business.

The joint venture plans to build a yogurt manufacturing plant in Batavia, in New York state, due to open in 2013.

The U.S. Company has been part of a joint venture with Almarai, Saudi Arabia's largest dairy company, since 2009.