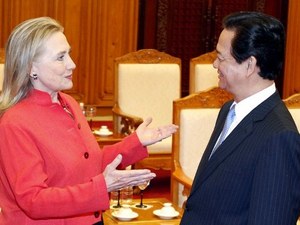 Hillary Clinton met with Vietnam's top communist leaders Tuesday for talks aimed at boosting trade as the U.S. seeks to shore up its stuttering economy with an Asia-focused export drive.

But the Secretary of State, who arrived from a trip to Mongolia, also made a strong push for improved human rights, arguing: "Democracy and prosperity go hand-in-hand. Political reform and economic growth are linked."

There have been "remarkable" changes in Vietnam and the cooperation between the two countries is "steadily growing", Clinton said, adding that they shared "important strategic interests" on issues like the South China Sea.

Vietnam has made clear it welcomes a closer relationship with its former wartime enemy amid territorial disputes with its historic rival China.

They agreed disputes in the South China Sea should be resolved through "peaceful measures" and Minh said he hoped the bilateral relationship would "grow rigorously" in years to come.

Later this week Clinton will host a meeting of American business leaders in the Cambodian city of Siem Reap, on boosting U.S. exports to the region and taking advantage of the region's growing middle class.

At a forum in a Hanoi hotel she urged American and Vietnamese business leaders "let's get to work", adding, "there is so much untapped potential".

Since 2010 the U.S.-Vietnam trade partnership has expanded 40 percent, Clinton told the gathering. Annual bilateral trade now stands at some $22 billion with the U.S. being the seventh largest foreign investor in Vietnam, she said.

"The United States is now Vietnam's largest market for exports and we are very proud of that. And American companies are poised to help Vietnam take on many of its current challenges."

However, a U.S. official confirmed that the relationship was lopsided, with U.S. exports to Vietnam accounting for some $4.3 billion, while Vietnamese imports to the United States were worth $17.4 billion.

"There is no doubt that American business is eager to invest more in Asia," Clinton told the forum.

"Companies are taking advantage of an improving business climate and setting up shop to serve the needs of Asia's growing middle class."

Vietnam, where the pace of economic growth slowed to a three-year low of 4.38 percent in the first half of 2012, could benefit significantly if a regional Trans-Pacific Partnership is finalized by the end of the year, Clinton stressed earlier in the day at a joint press conference with Minh.

But the accord called for "higher standards", and Vietnam must "create more space for the free exchange of ideas, strengthen the rule of law and respect the universal rights of all its workers, including the right to unionize", she said.

Clinton has come under pressure to speak out more on human rights, with one U.S. congressman Monday demanding the removal of Washington's ambassador to Vietnam, accusing him of failing to press the issue.

A top U.S. official confirmed Tuesday that at Washington's request Clinton had met with party head Trong, saying that there were "elements within the politburo that are deeply wary about the relationship with the United States".

"Secretary Clinton made an incredibly clear, very firm case... with specific names and concerns... and underscored that we have been raising these cases now in some cases for years with little progress," the official said.

At the press conference Clinton stressed she had raised issues such as human rights and the lack of freedom of information and online freedoms.