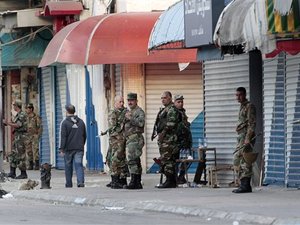 Producer Ayat Basma and cameraman Ezzat Baltaji were expected to return to their Lebanon base on Saturday evening, but failed to meet up with a taxi which had been sent to pick them up from the border, an official with the agency said.

There has been no contact with either of the men since 1722 GMT Saturday when Baltaji left a phone message with a colleague in Beirut saying: "We will leave now."

"Reuters is deeply concerned about our two Reuters television colleagues who went missing in Syria on Saturday," Stephen Adler, the agency's editor-in-chief, said in a report on the company's website.

"We have reached out to the relevant authorities in Syria and have asked for their help in securing our colleagues' safe return home," he added.

The Lebanese journalists were reporting on protests which erupted against Syrian President Bashar al-Assad in the south of the country a week ago.

Earlier Sunday, the agency reported on its website that another of its journalists had been expelled from Syria after authorities accused him of filing "unprofessional and false" reports on the country's unrest.

Senior correspondent Khaled Yacoub Oweis, a Jordanian national, worked in Damascus from February 2006 until Friday, when he was asked to leave by the information ministry.

"Your accreditation has been withdrawn and you are being expelled because of your unprofessional and false news," the agency quoted a senior ministry official telling the reporter. "You have to leave immediately."

The agency defended its output and vowed to continue reporting on the protests.

"We regret the decision by the Syrian government to exclude our correspondent," Adler said.

"We stand by our coverage and are committed to continuing our accurate and impartial reporting about Syria."