Tweeting The Turmoil in The Middle East 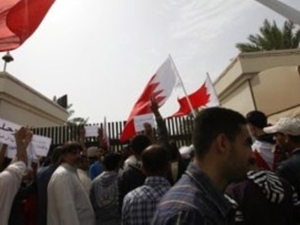 For the nearly 40,000 followers of his Twitter feed, Andy Carvin is providing a unique window into the turmoil in the Middle East.

For a media industry facing its own ferment, Carvin, who works online for National Public Radio (NPR), is offering a glimpse into journalism's future, using the Web to report the historic events in a fresh and innovative way.

The Washington-based Carvin has been glued to his desktop at work and his laptop at home since late December, firing off tweets first on the protests in Tunisia and continuing through Egypt, Bahrain, Yemen, Libya and now Syria.

Carvin's Twitter account, @acarvin, is a steady stream of messages from participants in the protests, eye-witnesses, expatriates and observers along with links to news reports and photos and videos.

The result is an intimate, gripping and often emotional ground-level view of the reshaping of the Middle East.

After giving a blow-by-blow on Twitter of the fall of Tunisian president Zine el Abidine Ben Ali, Carvin was prompted to continue by a message he saw from a Tunisian on Twitter.

"That really made me realize that this could be the start of something big," Carvin said in an interview with Agence France Presse.

Asked to describe what he's doing, Carvin said "a lot of people have used the word 'curating' which I have very mixed feelings about.

"In one sense I'm doing anchor coverage of the Middle East using Twitter, in the same way that you might see a broadcaster on television during a breaking news story," he said. "Except rather than having a group of producers and editors assisting me I have my Twitter followers.

"They're able to essentially serve as my production and research team," said Carvin, who has visited the Middle East but does not speak Arabic.

"I'm asking them 'Help me find the context for what's happened here, help me translate, help me identify the accents that are in the videos,'" he said.

Carvin does not simply retweet everything he sees, but adds a healthy dose of journalistic skepticism.

"Source?" he asked @mohdashoor while retweeting a message from the Twitter user who claimed a maternity hospital that treated injured protestors had been demolished by the Bahrain authorities.

"I often challenge things," Carvin said. "The vast majority of folks that are posting information, their hearts are in the right place but sometimes the fog of war affects them just as it would any other journalist.

"And also most of these folks clearly have a personal bias in terms of who they want to win," he said. "So I have to take all of those things into account when trying to vet sources and determining who to retweet."

A lot of Egyptians were on Twitter but Yemen and Libya have been more challenging for Carvin because of limited Internet penetration and the much smaller usage of social media.

"They're in a very, very tough situation (in Libya) because the mere act of trying to get information out makes them a target," he said.

The dangers to "citizen journalists" hit home personally for Carvin when his primary contact in Libya, Mohammad Nabbous, who ran a Livestream channel from Benghazi, was killed in a firefight on March 19.

Twitter is Carvin's platform, but it is not his only news-gathering tool.

"I'm having a lot of backchannel conversations on Facebook, on Skype, on email, and occasionally on the phone," he said. "Facebook and YouTube and other content-sharing sites have been a goldmine of new content."

Pictures and video have provided Carvin with one of his biggest dilemmas because of the extremely graphic nature of many of the images.

"Historically most media organizations, at least in the US, haven't posted the most graphic of footage they've collected. The same goes for newspapers," Carvin said.

"I've taken the position that anything that I find that I believe is accurate I will post, always with a preamble warning people of its graphic nature.

"I'm giving people the choice," Carvin said. "Mainly what I'm trying to do is have my Twitter feed essentially become an archive of the horrors of war and allow people to bear witness if they feel comfortable doing so.

Carvin has more than doubled his number of followers since he began tweeting the events in the Middle East. They span the globe from New York to New Zealand and list professions as varied as truck drivers, poets and police detectives.

Also U.S. ambassadors. On Friday, the U.S. envoy to the United Nations, Susan Rice recommended to her followers on @AmbassadorRice that they follow @acarvin.

One recent follower is American football star Chad Ochocinco, whose @ochocinco account has over 1.8 million followers.

"He sent a tweet to all of his followers recommending me as a news source saying 'If you don't watch TV, follow @acarvin he's my only source for news now,'" Carvin said. "That was quite an endorsement."

Carvin said NPR has been extremely supportive of his full-time tweeting and admirers of his work recently began making donations to NPR member stations and sending out tweets with the hashtag #gave4andy.

Carvin said the biggest lesson he's learned from the experience is that "most of the people who try to reach out to you are not trying to mislead you.

"It doesn't necessarily mean that everything they send you is true but there's generally a grain of truth in most of what you see," he said.