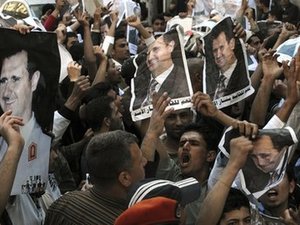 Some 300 Syrian laborers demonstrated in front of their country's embassy in Beirut on Monday to express their support for the regime of Syrian President Bashar al-Assad.

"We are with Assad and against any change," said protester Mohammed Hilal, 18, one of tens of thousands of laborers employed in Lebanon, mainly in the construction sector.

"We're better off like we are than turning into Libya, Sudan or Afghanistan," he added.

Taleb Hilal Saleh, another protester, said he was convinced that the recent unprecedented uprisings in Syria were the work of people keen on destroying the country.

Syria's ambassador to Beirut, Ali Abdul Karim Ali, addressed the crowd thanking them for their support and assuring them that their country's national unity was intact.

Similar protests on Sunday in various parts of Beirut left one laborer wounded in a drive-by shooting.

An anti-regime protest was meanwhile planned on Tuesday in the mainly Sunni coastal city of Tripoli.