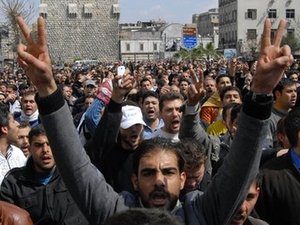 Two Reuters journalists who went missing at the weekend while covering the recent unrest in Syria have been released by authorities and have returned to Beirut, the news agency said Monday.

Reuters editor-in-chief Stephen Adler was quoted as saying that television producer Ayat Basma and cameraman Ezzat Baltaji were back in their home base in Beirut and were doing well.

"Reuters is concerned that its journalists were detained and held incommunicado for so long. We are delighted by their release and look forward to welcoming Ayat and Ezzat back," Adler was quoted as saying.

"We would like to thank everyone who helped us resolve the issue."

Reuters said a Syrian official informed the agency that the two journalists were detained because they did not have a permit to work in Syria and had filmed in an area where that was not permitted.

Both journalists disappeared Saturday evening after sending a message to a colleague that they were headed back to Beirut.

The Lebanese journalists were reporting on unprecedented protests in Syria in the last two weeks which have threatened the authoritarian regime of President Bashar al-Assad.

Reuters said that another of its journalists had been expelled from Syria last week after authorities accused him of filing "unprofessional and false" reports on the country's unrest.

Senior correspondent Khaled Yacoub Oweis, a Jordanian national, worked in Damascus from February 2006 until Friday, when he was asked to leave by the information ministry.