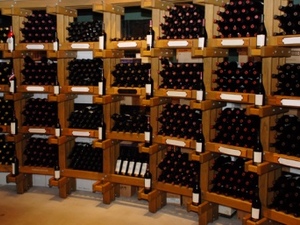 "I was very surprised to see the report by the audit board," Foreign Minister Seiji Maehara, who took office a month ago, told a parliamentary committee after a recent audit of embassies' booze stocks.

"I knew there was a considerable inventory of wine, but one mission had as much as 30 times" their 2009 annual consumption, he said.

"It would be fine if they kept their stocks, but some missions discarded 1,000 bottles. It's a big waste."

Maehara said the center-left government that swept to power last year had pushed efforts since then to reduce the stockpiles by transferring extra bottles between embassies and through sales to private entities.

"We have made reforms to bring the inventory to an appropriate level. We want to manage wine and other stocks so that we eliminate waste," he said.

The ministry's audit board pointed to the excessive inventory in a report earlier this month surveying 51 of Japan's 211 diplomatic missions abroad.

It found Japan's mission to the Paris-based Organization for Economic Cooperation and Development had 7,896 wine bottles at the end of March 2010.

This means the inventory is enough for 30 years considering the mission consumed 268 bottles in the 2009 fiscal year to March.

Japan's mission to the Conference on Disarmament in Geneva had 1,436 bottles, the equivalent of nearly 12 years of its consumption.

The consulate-general in New York and three other missions reported discarding a total of 1,044 bottles of wine and other alcoholic beverages, citing their degraded quality.(AFP)