Mustaqbal: Bekaa Developments Aimed at Returning Lebanon to Dark Period of its Past 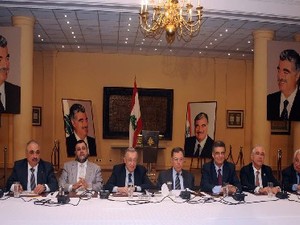 The Mustaqbal bloc condemned on Tuesday the recent security developments in Lebanon, especially the kidnapping of seven Estonians in the Bekaa, which it said “are aimed at returning Lebanon to a dark period of its past.”

It added after its weekly meeting in Qoreitem headed by former Prime Minister Fouad Saniora: “Malicious powers are behind these incidents that are aimed at targeting mutual coexistence and destabilizing Lebanon.”

The bloc stressed the role security forces and specialized judicial sides must play in intensifying investigations in order to uncover and punish those behind the abduction.

“Such incidents emphasize the need for the Lebanese government to impose its authority throughout the country and limit the possession of arms to the state,” it added.

Addressing the developments in the Arab world, the Mustaqbal bloc condemned allegations that “Lebanon or some of its political powers” are sending weapons to Syria.

“Such claims are completely baseless and they are meant to be employed in the political tensions in Lebanon,” it concluded.