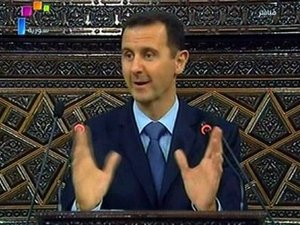 Syrian President Bashar al-Assad on Wednesday blamed conspirators for deadly unrest in Syria but failed to lift emergency rule or offer other concessions in his first speech since protests demanding greater freedoms erupted earlier this month.

Assad said his country was facing a "major conspiracy" plotted by "nearby and distant countries."

In a highly anticipated address to parliament that lasted almost one hour, Assad took aim at social networking websites and pan-Arab satellite television news channels but made no mention of any plans to lift the state of emergency.

Presidential adviser Buthaina Shaaban had told Agence France Presse on Sunday that Syria has also decided to lift emergency rule, which has been in force in the country since 1963.

But the autocratic regime of Assad, who succeeded his father Hafez al-Assad in the year 2000, has been rocked by a wave of demonstrations in defiance of the law over the past two weeks, with protesters emboldened by uprisings in the Arab world.

"I know that the Syrian people have been awaiting this speech since last week, but I was waiting to get the full picture ... to avoid giving an emotional address that would put the people at ease but have no real effect, at a time when our enemies are targeting Syria," Assad told parliament.

Assad, who warned Syria was going through a "test of unity," said his country's enemies had taken advantage of the needs of the people to incite strife.

"This conspiracy is different in shape and timing from what is going on in the Arab world," he said.

"Syria is not isolated from the region ... but we are not a copy of other countries.

"We are all for reform. That is the duty of the state. But we are not for strife," said the Syrian leader.

"Reform is not a trend," he added. "When the people demand their rights, it is the state's duty to fulfill their demands.

"What we should watch out for is starting reforms under these circumstances right now, this passing wave.

An ally of Iran and sworn foe of Washington's key regional partner Israel, Syria's government has been facing demands for major change by protesters emboldened by popular uprisings in the Arab world.

Assad was widely expected to elaborate on a string of reforms announced last week, which came in response to two weeks of protests demanding reform and more freedoms in the country ruled by the Baath party since 1963.

Shaaban on Sunday told AFP in an interview that the decision to lift the state of emergency had already been made, but could not elaborate on the "time frame."

Assad echoed that statement on Wednesday.

"The measures announced Thursday were not made suddenly," he said.

"The emergency law and political parties law have been under study for a year.

"There are more, unannounced reforms ... but giving a timeframe is a logistic matter.

"When we announce it in such circumstances, it is difficult to make that deadline," the president said.

The wave of protests, which began on March 15 in Damascus, were quickly contained by security forces, before taking root in the southern tribal region of Daraa and the multi-confessional coastal city of Latakia in the north.

Daraa has sustained the most casualties, with activists estimating at least 100 people killed on Wednesday last week in clashes with security forces.

Syrian rights activists have accused security forces of killing 130 people in the crackdown, while Amnesty International says upward of 55 people have been killed. Officials put the toll at some 30 killed.

The new cabinet, which is expected to be announced by the end of the week, will face the task of implementing the reforms.

Authorities have accused fundamentalists and "armed gangs" of aiming to incite unrest in the country, particularly Daraa and Latakia, which emerged as the focal points of dissent.