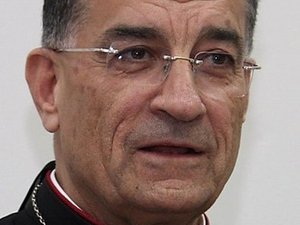 Maronite Patriarch Beshara al-Rahi stated on Wednesday that the Lebanese people can no longer accept the delay in the government formation.

He said: “Everything has stopped functioning … Political and legislative life has been halted.”

“If the political powers fail to reach an agreement on the distribution of portfolios then a technocrat government should be formed,” he added.

“A one-sided government should not be formed” because it violates the constitution, the patriarch stressed.

Al-Rahi is expected to travel to Syria in order to visit its parishes, he told MTV on Tuesday.

He said: "I will leave the political work to the Lebanese and Syrian governments … and I hope that my visit won't be misinterpreted."

"Bkirki is a Christian and national authority and no one can question this," he stressed.

"We are working on awareness in Lebanon and the Arab world in order to preserve the Christian presence in the Middle East," the patriarch stated.

Furthermore, al-Rahi highlighted the role the youth play in daily life, saying that they should not forget their identity or be manipulated for political gains.

The newly appointed patriarch is also scheduled to travel to the Vatican on April 11 where he is scheduled to meet with Pope Benedict XVI and hold a mass at St. Peter's cathedral.

Earlier on Tuesday, al-Rahi held talks at Bkirki with the representative of the Palestinian Liberation Organization in Lebanon Abdullah Abdullah who congratulated him on his election as patriarch.

The talks focused on the concerns of Palestinians living in Lebanon, whom Abdullah said are keen on Lebanon's security, stability, and sovereignty.

The PLO representative also presented al-Rahi with an invitation to visit the Holy Land, meet Palestinian officials, and celebrate the Divine Sacrifice.