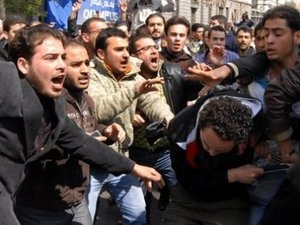 A key speech by Syrian President Bashar al-Assad on Wednesday lacked real substance and failed to mention the kind of reforms his people are demanding, the United States said.

In a bid to quell weeks of protests against his iron-clad rule, Assad earlier gave a rare address in parliament.

He blamed "enemies" and conspirators for the deadly unrest but declined to elaborate on promised reforms and made no mention of the hoped-for lifting of a decades-old state of emergency.

"Ultimately it's going to be the Syrian people, the ones who judge what they've heard today and whether or not President Assad demonstrated positive movement forward in meeting their aspirations," State Department spokesman Mark Toner told journalists in Washington.

"But we expect they're going to be disappointed. We feel the speech fell short with respect to the kind of reforms the Syrian people demanded and President Assad's advisor suggested was coming.

"It's clear to us that it didn't really have much substance to it and didn't talk about specific reforms," Toner said, adding: "We would strongly condemn any violence against the protesters."

Assad, who succeeded his father Hafez in 2000, has come under unprecedented domestic pressure over the past two weeks, with protesters defying emergency rule in public protests demanding more freedoms, emboldened by the wave of protest that has rocked the Arab world since December.

The demonstrations, which began on March 15, were quickly contained in Damascus, but took root in the tribal region of Daraa, south of the capital, and in the confessionally divided city of Latakia on the Mediterranean coast.

Gunfire could be heard in the port city following Assad's speech.

But it is Daraa that has sustained the most casualties, with activists estimating that at least 100 people had been killed in just one day of clashes last week with security forces.

Syrian human rights activists have accused security forces of killing 130 people in the crackdown. Amnesty International says upward of 55 people have been killed. Officials put the toll at some 30 dead.