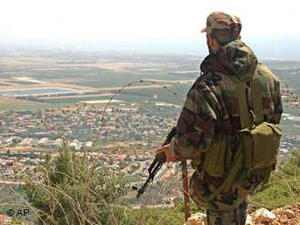 A map of alleged Hizbullah installations provided to The Washington Post this week by Israeli military officials identifies more than 550 underground bunkers, 300 surveillance sites and 100 other facilities in southern Lebanon, the newspaper said.

“In releasing the map, the Israeli military appeared to be trying to preempt international criticism of any future offensive against the alleged sites, many of which are located in residential villages alongside hospitals, schools and even civilian homes,” the Post said.

“Our interest is to show the world that the Hizbullah organization has turned these villages into fighting zones,” the daily quoted a senior Israeli commander as saying.

According to Israeli military officials, the majority of arms that the Shiite group has stashed in the south since the 2006 war with Israel were made or supplied by Syria, including short-range Scud missiles as well as 302mm rockets, which could reach Tel Aviv.

The officials said that most of Hizbullah’s weapons are covertly transferred by truck from depots near Damascus to storage facilities in southern Lebanon.