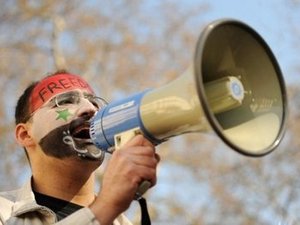 The Syrian Observatory for Human Rights said it received a letter from Syrian political detainees in Damascus Central Prison calling for peaceful demonstrations on Friday for the sake of “freedom, justice and equality.”

“The hour of truth has arrived and comprehensive change is the only choice left,” it added.

“The regime that has ruled Syria since 1963 has led it to the edge of the abyss, its leaders have rejected the people’s demands for comprehensive political reform, and they hold on to power through opening fire at unarmed demonstrators, killing and wounding hundreds,” the letter explained.

“Syria is on the brink of change and it needs its sons to end the tragedy that has resulted in a political and economic national catastrophe,” it continued.