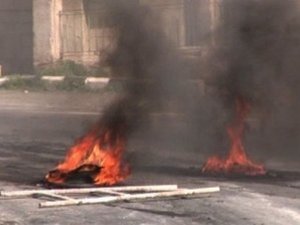 A Reuters journalist of Jordanian nationality has gone missing in unrest-hit Syria, the Amman government announced Thursday, saying it was seeking information about his whereabouts.

"The Jordanian consul in Damascus is trying to get information from the Syrian authorities about Suleiman Khalidi of the Reuters bureau in Amman. He went to Damascus but no one heard from him since Tuesday," foreign ministry spokesman Mohammed Kayed told Agence France Presse.

Reuters said in a statement that Khalidi was last seen in the Old City of Damascus on Tuesday.

"He has not answered his mobile telephone since shortly after 2 p.m. (1200 GMT) on Tuesday," it said.

Also, Reuters photographer Khaled al-Hariri, a Syrian based in Damascus, has not been in contact with colleagues since Monday, the news agency said.

Both Khalidi and Hariri have worked for Reuters for more than 20 years.

The Syrian authorities on Monday released two Reuters journalists after detaining them for two days.

Also senior Reuters correspondent Khaled Yacoub Oweis, a Jordanian national, worked in Damascus from February 2006 until Friday, when he was asked to leave by the information ministry.

The regime of Syria's President Bashar al-Assad is facing domestic pressure unprecedented in his 11-year rule, as protests demanding greater freedoms enter a third week in the country.