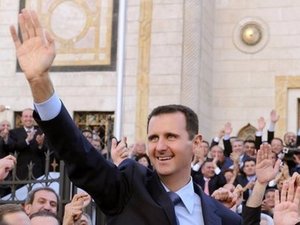 Syria is launching an immediate probe into the deaths of "civilians and troops" in Daraa and Latakia, two cities that have emerged as the focal points of protests, state media reported Thursday.

"Syrian President Bashar al-Assad has charged the head of the judges' council with forming a committee to begin an investigation, effective immediately, into the deaths of civilians and troops in the governorates of Daraa and Latakia," read a report on the state-run news agency SANA.

"This committee has the right to request information or documents from any party," added the report, which could mean citizens and members of the security forces could be interrogated.

Earlier Thursday, SANA said Syria was forming a judicial committee to form new legislation and lift Syria's state of emergency, in force since 1963.

"Under a directive by President Bashar al-Assad, a committee of legal experts has been formed to study new laws on national security and counter-terrorism, in order to pave the way for ending the state of emergency," SANA said.

"The committee should finish its work by April 25," it added.

Assad is facing domestic pressure unprecedented in his 11-year rule as protests demanding greater freedoms in the country, which has been in a state of emergency for close to 50 years, enter their third week.

Protesters have called for more rallies in mosques across Syria after Friday's weekly Muslim prayers.

The southern governorate of Daraa, a tribal area at the Jordanian border, and the multi-confessional northern city of Latakia have witnessed the most persistent protests demanding major changes in Syria, which has been ruled by the Baath party since 1963.

Reports of more killings in the port city of Latakia, home to some 450,000 Christians, Sunnis and Alawite Muslims, surfaced on Wednesday, shortly after Assad's first speech since the protests began mid-March.

London-based rights group the Syrian Human Rights Committee, which is close to the Muslim Brotherhood, said 25 people were killed by security forces in Latakia, northwest of the country, in a "bloodbath."

A political activist in Latakia contacted by phone said several had been wounded and four to five people killed on Wednesday, but the exact numbers remained unclear.

He said demonstrators who were unhappy with Assad's speech had come out in the streets and were shot at.

City residents also reported a drive-by shooting at a sit-in, where protesters had raised banners reading: "No to strife, yes to peace and freedom."

None of the reports could be independently confirmed.

Syrian troops have been deployed in force in Latakia as well as Daraa since the outbreak of the protests.

Activists estimate more than 130 people have been killed in clashes with security forces, mainly in Daraa and Latakia.

Officials put the death toll at closer to 30.