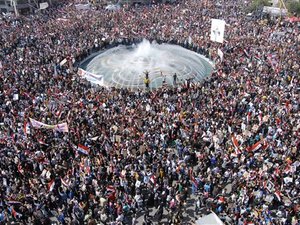 The United States urged Americans on Thursday to avoid travel to Syria and advised those already there to consider leaving a country that is reeling from weeks of deadly political unrest.

"We urge U.S. citizens to defer non-essential travel to Syria at this time. U.S. citizens currently in Syria should consider departing," the State Department said in a statement.

"U.S. citizens currently in Syria are advised against all travel to the coastal city of Latakia as well as the southern city of Daraa and the surrounding towns and villages," it said.

"Demonstrations in those areas have been violently suppressed by Syrian security forces and there are reports of curtailed telecommunications, ongoing disturbances and live gunfire in various neighborhoods in the region."

Protests in other cities like Damascus, Aleppo, Homs and Hama "have degenerated on several occasions into violent clashes between security forces and protesters, resulting in deaths, injuries, and property damage," it said.

"We remind U.S. citizens that even demonstrations intended to be peaceful can turn confrontational and escalate into violence," the statement said.

Activists estimate more than 130 people have been killed in clashes with security forces, mainly in Daraa and Latakia. Officials put the death toll at closer to 30.

The State Department said Tuesday that three Americans had been arrested in Damascus in recent days and that two of them were still being held.