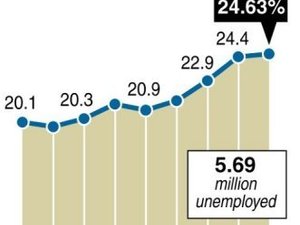 Spain's jobless rate neared 25 percent in June, officials said Friday, darkening the recession outlook despite relief on financial markets at a vow of support by the European Central Bank.

The unemployment rate rose in the second quarter to 24.63 percent and a huge 53 percent among the young, despite the start of the tourist season, figures from the national statistic office showed.

The increase in the overall jobless numbers was smaller than in the first quarter, with the number of eligible people out of work rising to nearly 5.7 million people.

Between April and June, 53,500 people lost their jobs, compared with 365,900 in the first quarter, the national statistics office said.

The unemployment rate rose from 24.4 percent recorded in the first quarter -- already the highest in the industrial world -- as Spain entered its third straight quarter of economic contraction.

Economic growth figures for the second quarter are expected on Monday. The Bank of Spain last week estimated a contraction of 0.4 percent, after a 0.3 percent decrease in January to March.

Spain's economy is reeling in the aftermath of a decade long real estate boom that crashed with the debt crisis, bringing the Spanish financial sector to the brink of insolvency.

Under pressure from European authorities who have accepted to bailout Spanish banks, Spain's conservative government has approved tens of billions of euros' worth of spending cuts, tax hikes and other measures.

The latest set of measures announced by Prime Minister Mariano Rajoy on July 11 aimed to save 65 billion euros ($80 billion) over three years.

Rajoy says the steps will help cut the public deficit in line with targets agreed with the European Union and strengthen the economy in the long term.

Critics say the measures will make the poor suffer unfairly from moves such as a public sector bonus cut and a rise in sales tax that together will hit consumption.

"All the spending cut policies they are taking are restrictive and run counter to growth," said Alberto Roldan, an analyst at Spanish brokerage Inverseguros.

"Raising the fiscal pressure in a country with 25 percent unemployment is absolutely regressive."

Hundreds of thousands of Spaniards have marched noisily in the street over recent weeks in protest at the measures.

The Spanish region hardest hit by rising unemployment was Catalonia in the northeast with a rate of 33.92 percent, Friday's figures showed. The lowest rate was 14.56 percent in the affluent Basque Country.

The Spanish government's latest unemployment forecast is for a rate of 24.6 percent at the end of 2012. This is a separate figure from that of the statistics office, an autonomous state body.

Spain's sovereign interest rates had risen to dangerous levels but eased back Thursday after European Central Bank chief Mario Draghi vowed "to do whatever it takes to preserve the euro."

The Madrid stock market was up fractionally by 0.15 percent in early afternoon trading Friday, after surging six percent Thursday on Draghi's comments.