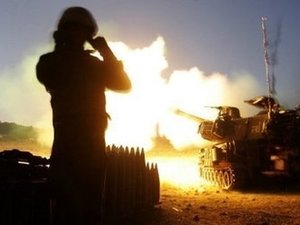 The Israeli military held a set of war games this week aimed at preparing the army for all-out war with Hizbullah, Syria and Hamas, the Jerusalem Post reported.

The drill did not include soldiers or live-fire exercises, but was held to drill commanders and their decisions in the event of a large-scale war on multiple fronts, it said.

The Israeli army stressed that the drill was part of its routine exercise program and included all its branches – ground, air and navy.

The scenarios simulated during the drill included a war with Hizbullah in Lebanon, sparked by an attack overseas as well as the involvement of Syria, Hamas and Iran.

“The drill is part of our need to retain a level of readiness,” the newspaper quoted Chief of General Staff Lt.-Gen. Benny Gantz as saying.

Israeli Defense Minister Ehud Barak and members of the Knesset’s Foreign Affairs and Defense Committee visited the base where the exercise was held.

Also Thursday, Barak visited the site of the Iron Dome counter-rocket defense system outside of Beersheba.