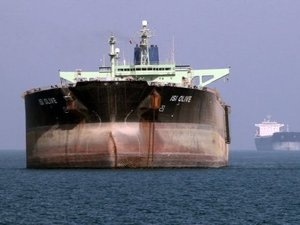 Iran is expanding its insurance on its fleet of 47 oil tankers through a multi-billion-dollar line of credit as it seeks to get around EU sanctions crimping its crude exports, reports said on Saturday.

"Iran is ready to give total insurance for the transport of its oil... and the commitments by Iranian insurers are no different from those by Western insurers and therefore all risks and dangers are insured," Iran's OPEC representative, Mohammad Ali Khatibi, was quoted as saying by the state-run newspaper IRAN.

The Fars news agency cited an "informed source" it did not identify as saying that the government had given the central state insurance agency, Bimeh Markazi, a line of credit worth several billion dollars to insure the tankers. It said 10 percent of the money had already been transferred.

The measure, apparently aimed at any buyer of Iranian crude worldwide, expands on a promise of insurance for deliveries of its oil using Iranian tankers to major customers China and India. South Korea is also mulling joining the offer.

Iran is suffering a cut in oil sales abroad of up to 40 percent, according to the International Energy Agency (IEA), because of an EU embargo on Iranian crude imports and a related ban on European insurers providing cover for deliveries of Iranian oil anywhere in the world.

European insurers accounted for 90 percent of coverage for Iran before the EU sanctions took effect on July 1.

Iran, which is striving to maintain a semblance of business as usual over its oil exports, is attempting to fill the insurance gap itself, but it faces several obstacles.

U.S. sanctions targeting Iranian financial transactions make it unclear how Iran could pay out any claims arising from accidents involving its tankers.

Oil tankers are typically insured for up to $1 billion because of the risk of oil spills.

A European analyst in Tehran noted that the 40 tankers in Iran's fleet owned by the NITC, formerly known as the National Iranian Tanker Company, each had a long-distance capacity of up to two million barrels of oil.

Several of the NITC vessels were being used in June to store Iranian offshore crude that Tehran has not been able to sell because of the sanctions, according to industry specialists.

Iran has announced plans to quickly expand its onshore storage capacity, which has been saturated, including by subcontracting to private firms. Tehran has also ordered 12 new supertankers from China and should receive the first in December.