Several Killed as Thousands Defy Assad to Protest in Syria 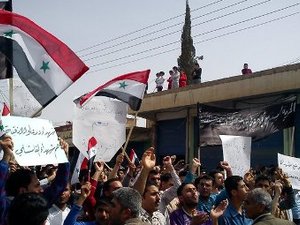 Syrian security forces opened fire on protesters on Friday north of Damascus and in the south of the country, killing at least nine people, a witness and a human rights activist said, as thousands of Syrians staged demonstrations after Friday prayers.

At least eight protesters fell in Douma, 15 kilometers north of the Syrian capital when police opened fire after protesters emerging from a mosque pelted them with stones, the witness told Agence France Presse by telephone.

The security forces fired tear gas at the protesters to disperse them before firing live rounds.

The death toll could be more than 10, said the witness, but he only provided AFP six full names for those killed: Ibrahim Mubayed, Ahmad Rajab, Fuad Ballah, Mohammed Alaya, Naim al-Moqaddam and Ammar al-Tinawi as well as a person from the Khuli family and another from the Issa family.

"Dozens of people were also wounded and the security forces arrested dozens of others," the witness said, adding that police are arresting some of the wounded and preventing them from going to hospital for treatment.

Later Friday, Syria's state-run news agency SANA quoted an official source as saying that "members of an armed group ascended to the roofs of some buildings in the city of Douma this afternoon and opened fire on hundreds of citizens gathered in the city as well as on the security forces, killing several people and wounding dozens of citizens, policemen and security personnel."

According to the witness in Douma, around 3,000 worshippers took to the streets after the weekly prayers, emerging from different mosques in the town.

Terrified residents cowered indoors as snipers on rooftops opened fire on anyone who went outside, the witness said, adding that security forces ringed Douma, letting in only residents with the right ID cards.

Meanwhile at least three people were killed in the southern village of Sanamain near the flashpoint city of Daraa, when security forces opened fire to disperse a protest, a human rights activist said.

But he could identify only one of the victims, Dia al-Shumari, in his 20s, who was shot dead as he entered Sanamain with a group of protesters from two nearby villages, Ankhal and Jassem.

There was no independent confirmation of the report.

In Daraa, one of the main focal points of rising dissent, witnesses told AFP that thousands of faithful gathered outside the flashpoint southern town's courthouse after leaving a mosque.

"Death rather than humiliation," and "National Unity," they shouted.

Chants were also directed against President Bashar al-Assad, whose highly anticipated speech to parliament on Wednesday failed to match the demands of pro-reform protests that erupted more than two weeks ago.

"Hundreds of people marched peacefully through the streets after Friday prayers in Qamishli and Amuda chanting 'We want freedom' and 'God, Syria and freedom'," rights activist Radif Mustafa told AFP.

The "Friday of Martyrs" protests were also held from the coastal city of Latakia to Homs and Darriya, near the capital Damascus, where people chanted: "My beloved Syria, give me my freedom."

"An armed group opened fire on citizens gathered in the Homs neighborhood of al-Bayyada, killing a girl," SANA quoted an official source as saying later in the day.

The new agency confirmed demonstrations took place without incident near mosques in Daraa and Latakia, where protesters paid tribute to martyrs and called for speedier reforms.

It noted that Syrian governorates were "calm" after Friday prayers and that sermons had stressed the importance of national unity.

In Damascus, hundreds of protesters locked themselves up inside Al-Rifai mosque in the city center chanting "Freedom, freedom," as security forces tried to break in, a demonstrator said, and a group of pro-regime loyalists gathered in the square opposite.

In Baniyas, 280 kilometers northwest of Damascus, about 1,000 people demonstrated without incident. A petition signed by 18 Muslim clerics said the sheikhs "back the people's demands for reforms, liberty, the lifting of emergency law and the right to protest."

A little further north, in the confessionally divided city of Latakia on the Mediterranean coast, around 200 people staged a protest without incident in the Sleibi suburb.

It was the third week in succession for protests following Friday Muslim prayers.

President Assad, who is facing domestic pressure unprecedented in his 11-year rule, failed to lift almost 50 years of emergency rule in his first address to the nation since the protests demanding greater freedoms broke out on March 15.

Instead, he said there was a "conspiracy" targeting unity in Syria, blaming the country's "enemies" for taking advantage of the needs of the people to incite division in the country ruled by emergency law since the Baath party seized power in 1963.

The Syrian Revolution 2011, a wildly popular yet anonymous Facebook group that has emerged as a motor of the protests, had called for rallies at all mosques after Friday prayers until their demands for "freedom" are met.

The protests so far have been deadly with activists estimating more than 160 people killed in clashes with security forces, mainly in Daraa, a tribal area on the Jordanian border, and the coastal city of Latakia.

Officials put the death toll at about 30 and have accused Muslim extremists and "armed gangs" of pushing peaceful rallies into violence with the aim of inciting sectarian unrest in Syria, which prides itself on coexistence in a region torn by confessional strife.

In a conciliatory move, Assad on Thursday ordered a string of reforms, including a study of new laws on the media and political pluralism and plans to tackle the plight of 300,000 Kurds who have been denied Syrian citizenship for close to half a century.

Yet the state's attempt to reach out to protesters has failed to impress opposition movements and international rights groups, which say the president has missed a golden opportunity.