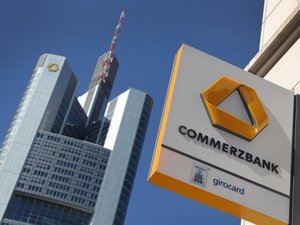 Germany's number-two bank Commerzbank early Tuesday announced the sale of its Ukrainian subsidiary Bank Forum for an undisclosed sum, but at a charge to the German bank of 286 million euros.

Commerzbank added in a statement it expected second quarter operating profits of 450 million euros against 55 million a year earlier, making an operating profit of one billion euros in the first half compared with 1.2 billion over the same period last year.

Pretax profit for the second quarter was expected to be 350 million euros, the bank said. Final figures are awaited on August 9.

Commerzbank had acquired a majority share in Bank Forum in the spring of 2008. But with the crisis "the expected dynamic development in Ukraine did not materialize in the following years and Commerzbank does not expect a lasting improvement in the near future."

Despite the 286 million euro cost of divesting itself of Bank Forum, this will not affect Commerzbank's capitalization -- on the contrary, it will enable the bank to separate itself from risky ventures, the statement said.