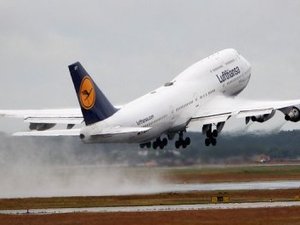 The United States will this week host a meeting of some 16 nations opposed to a controversial EU carbon tax on airlines, aiming to draw up an alternative plan, a U.S. official said Monday.

"All of the countries who are part of this meeting... are opposed to the EU's application of its emissions trading scheme (ETS) to foreign carriers," a senior administration official said.

The carbon tax imposed on airlines by the European Union took effect on January 1, but carriers will begin receiving bills only in 2013 after this year's carbon emissions have been assessed.

Although the list of participating nations in the talks being held at the Department of Transportation on Tuesday and Wednesday was not released, previous meetings of the group took place in Moscow and New Delhi.

"The purpose of this meeting is really to try to explore whether there might be a basis for a global solution to address greenhouse gas emissions from aviation," the official said, adding that the aim would be to eventually include the EU in a global scheme.

More than two dozen countries including China, India, Russia and the United States have opposed the EU move, saying it violates international law.

U.S. Transportation Secretary Ray LaHood earlier this month denounced the tax as "a lousy policy, a lousy law," saying instead of taking unilateral action, the EU "should have done it in a more collaborative way."

But the EU has said the tax will help it achieve cut carbon emissions by 20 percent by 2020 and has insisted it will not back down on the plan.

It says the cost for the airlines is manageable, calculating that the scheme could force the carriers to add between 4.0 euros ($5.50) and 24 euros to the price of a long-haul round-trip.

He said there were a number of "very real" legal issues arising out of existing conventions as well as policy problems.

"Essentially we agree with the objective, we would say it's the wrong way to pursue the right objective. The unilateral imposition of the ETS is creating huge antagonism all around the world," he said.

"If the EU can go and impose their own system around the world in this way, there's nothing to say that five or 10 or 20 other countries wouldn't do the same thing."

The concern was that you could "end up with a kind of patchwork system of different mechanisms, different taxes" rather than an overall global policy.

This week's talks were an "exploratory discussion to see if we can get on a path that could lead to a global solution" which could then be considered in the International Civil Aviation Organization," the U.S. official added.