Suleiman: We are Confident in Syria’s Ability to Overcome the Crisis 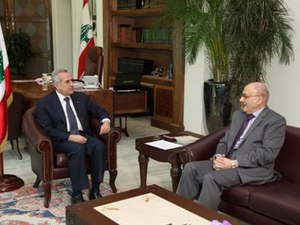 President Michel Suleiman hoped on Saturday for the return of stability to Syria and expressed his confidence in the Assad regime’s ability to overcome the crisis.

Suleiman made the remark during talks with the Secretary-General of the Lebanese-Syrian Higher Council, Nasri Khoury.

A statement issued by the president’s press office said Suleiman “reiterated hopes that things would return to stability and calm” in Syria and “expressed his confidence in the ability of the Syrian leadership to overcome this crisis.”

The president also voiced his confidence on Thursday that the Syrian leadership would overcome the instability that came after the recent anti-regime protests.