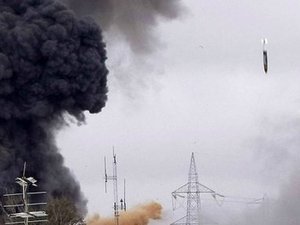 The four civilians comprised an ambulance driver and three medical students from the second city of Benghazi, who were part of a rebel convoy of five or six vehicles, said Issa Khamis, liaison officer for the rebels' transitional government in the town of Ajdabiya, east of Brega.

The strike came as rebel fighters were shooting tracer fire into the air to celebrate the entry of an advance column into Brega.

"It was a mistake (by the rebel fighters)," Khamis added. "The aircraft thought they were coming under attack and fired on the convoy."

A spokeswoman for NATO, which leads the international coalition, said the alliance was concerned about reports of civilian deaths.

"We are looking into these reports," said Oana Lungescu.

"We are always concerned by reports of civilian casualties. NATO's mission is to protect civilians and civilian areas from the threat of attack," she said, adding that no formal investigation had been launched.