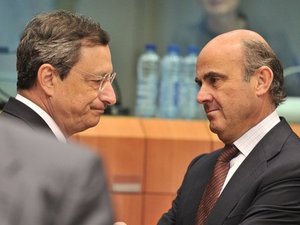 Markets were hoping for strong action from the European Central Bank to quell the Eurozone crisis on Thursday when it holds what one analyst called its "most exciting meeting for a long time".

Last week, ECB chief Mario Draghi sent markets soaring with an unusually strong pledge to do "whatever it takes" to save the crisis-wracked euro, adding: "And believe me, it will be enough."

This touched off a raft of similar promises from top Eurozone leaders including German Chancellor Angela Merkel, sparking speculation over a possible intervention on the markets to bring down borrowing costs for Spain and Italy.

Now market players are looking to Draghi to put his money where his mouth is. "We are now waiting for ECB action after Draghi's words," said Cedric Thellier, Eurozone economist at Natixis bank.

Asian markets were mixed in tentative trade ahead of the meeting.

Tokyo was 0.32 percent higher by the break and Sydney gained 0.16 percent while Hong Kong shed 0.35 percent and Shanghai eased 0.10 percent. Seoul was flat.

"We are now waiting to see whether the ECB can put their money where their mouth is," said HiFX Senior Trader Stuart Ive.

Analysts are eyeing three possible ECB actions that could help to ease the Eurozone debt crisis: an interest rate cut; a decision to buy the government bonds of struggling nations or offering the EU rescue fund unlimited borrowing.

A rate cut is not seen as a likely option, following last month's decision to slash rates to a historic low of 0.75 percent.

"The possibility of back-to-back cuts looks pretty remote. Germany doesn't need a rate cut (at least not yet) and a rate cut won't save Spain," said analysts from RBS European Economics.

A more likely tool to be selected from the ECB's box is the resumption of its disputed program of buying bonds on the secondary market so as to drive down borrowing costs for the likes of Eurozone strugglers Spain and Italy.

The ECB began this program in 2010 but effectively mothballed it late last year after buying some 211.5 billion euros ($260 billion) in bonds from Greece, Ireland, Portugal, Italy and Spain.

The purchases were hugely controversial in the central banking world and prompted the resignation of both German senior representatives at the ECB, who thought it compromised the cherished independence of the bank.

The powerful German central bank is still thought to be cool on the idea of restarting the program, leading analysts to speculate that Draghi may not announce its immediate resumption but merely threaten its deployment in future.

The third option might be to give the EU's rescue fund a banking license so that it could borrow directly from the ECB, giving it unlimited firepower to tackle the crisis.

However, this has also run up against firm German opposition, with government spokesman Georg Streiter telling a news conference on the eve of the ECB meeting that this was "absolutely not" part of Berlin's plans.

Several economists have suggested that Draghi's new policy of firm verbal intervention may suffice to calm the markets and obviate the need for actual policy action.

"More likely than not, the ECB will not act immediately but deliver a strong verbal intervention instead," forecast Berenberg Bank analyst Christian Schulz.

"With luck a forceful verbal intervention might already be enough to end this wave of the euro crisis," Schulz added.

However, others warned that Draghi had raised expectations so high with his comments last week that markets were bound to react with disappointment if he did not follow it up with a "game changing" policy effort.

"After his strong statements, the ECB president will have to deliver something on Thursday," said ING Bank analyst Carsten Brzeski.

Christoph Balz from Commerzbank said he was expecting "the most exciting ECB meeting for a long time" but predicted Draghi would "remain vague on many points".

Analysts at Capital Economics feared that Draghi had raised expectations to fever pitch, meaning that even a resumption of the bond-buying program could leave investors "unimpressed".

"The ECB's bark could prove louder than its bite," they commented.