Japan's Sharp Says it Will Cut 5,000 Jobs by March 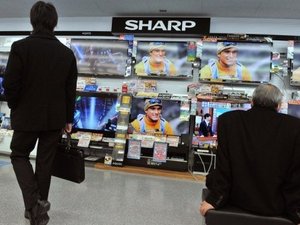 Japan's Sharp said Thursday it will cut 5,000 jobs by March as it reported a quarterly loss and said it would remain in the red for the rest of the year amid losses at its struggling TV business.

The major consumer electronics maker said its net loss for the April-June quarter was 138.4 billion yen ($1.76 billion), compared with a loss of 49.3 billion in the same period a year ago.

Its operating loss was 94.1 billion yen, plunging from an operating profit of 3.5 billion yen a year ago. Sales fell 28.4 percent to 458.6 billion yen.

The company, which has seen its mainstay television, liquid crystal display and solar panel products units struggle, said the job reductions were part of a bid to cut fixed costs by 100 billion yen to help its dented balance sheet.

Sharp also downgraded its annual earnings forecast, saying it now expected an annual net loss of 250 billion yen for the fiscal year through March 2013, a huge increase from an earlier projection for a loss of 30 billion yen.

It also raised its annual operating loss estimate to 100 billion yen, from an earlier 20 billion yen.

Annual sales are expected to be 2.5 trillion yen, down from an earlier projection for 2.7 trillion, it said.