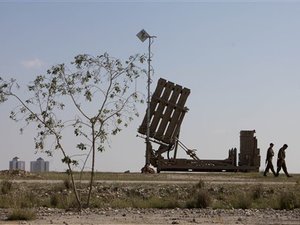 The Israeli army on Monday deployed a second battery of its Iron Dome short-range missile defense system, this time around the southern port city of Ashkelon, a military spokeswoman said.

"This battery was deployed around Ashkelon for security reasons, this is the second system to become operational after the deployment around Beersheva," she said, without giving further details.

The first battery of the unique multi-million dollar system came into operation on March 27 outside the southern desert city of Beersheva, just days after it was hit by several Grad rockets fired by militants from the northern Gaza Strip.

Ashkelon, which has a population of some 113,000, has also recently come under attack from Grad rockets, which have a range of up to 50 kilometers.

The defense system, the first of its kind in the world and still at the experimental stage, is not yet able to provide complete protection against the hundreds of rockets fired from Gaza into southern Israel, officials have said.

On Sunday, Defense Minister Ehud Barak said Israel would raise to six the number of Iron Dome batteries in operation over the next two years.

The system, developed by Israel's Rafael Advanced Defense Systems with the help of U.S. funding, is designed to intercept rockets and artillery shells fired from a range of between four and 70 kilometers.

Over the past five years, militants in Gaza and in south Lebanon have fired thousands of projectiles at the Jewish state, and Israel is planning to deploy the system along both borders.

Iron Dome will join the Arrow long-range ballistic missile defense system in an ambitious multi-layered program to protect Israeli cities from rockets and missiles fired from Lebanon or Gaza, Syria or Iran.

A third system, known as David's Sling, is currently under development with the aim of countering medium-range missiles.