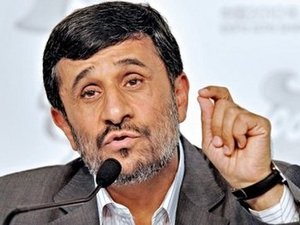 Iranian President Mahmoud Ahmadinejad in a telephone conversation has asked the U.N. chief to stop U.S. and Europe "intervention" in the region, the website of his office reported on Monday.

"The intervention of some European countries and America in the regional nations increases concern and makes circumstances more complicated," Ahmadinejad was quoted as telling U.N. Secretary General Ban Ki-moon.

The website said the Iranian president told the U.N. secretary general to prevent "catastrophes" as occurred in Afghanistan and Iraq happening in the region.

"The time has come for the secretary general of the United Nations to play the historical and decisive role in solving the existing issues based on dialogue and understanding so the catastrophes which occurred in Afghanistan and Iraq do not happen again," Ahmadinejad said.

"The double standard action of the Western countries in Bahrain and Libya and their silence towards the atrocities of the Zionist regime against the innocent Palestinians shows their contradictory performance in the world."

The hardliner's call came a day after Tehran blamed rising tensions between the Islamic republic and Gulf Arab states on a "Western and Zionist conspiracy."

"Sowing discord between Islamic countries, especially between Iran and the countries of the region is a Western and Zionist conspiracy," Iranian foreign ministry spokesman Ramin Mehmanparast said on Sunday, according to state media.