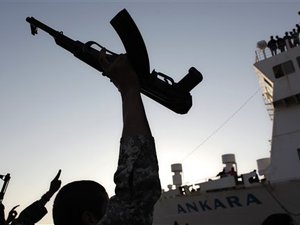 The Libyan rebels' Transitional National Council on Monday rejected any transition under Moammar Gadhafi's sons after The New York Times reported that two of them had proposed that.

"This is completely rejected by the council," its spokesman Shamseddin Abdulmelah said in the rebels' stronghold in the eastern city of Benghazi.

"Gadhafi and his sons have to leave before any diplomatic negotiations can take place."

At least two of Gadhafi's sons are proposing a transition to a constitutional democracy that would include their father's removal from power, the Times reported late Sunday.

Citing an unnamed diplomat and a Libyan official briefed on the plan, the newspaper said the transition would be spearheaded by one of Gadhafi's sons, Seif al-Islam.

The rebel spokesman said the regime had lost any right to talk of a negotiated exit after it had continued to pound the besieged third city of Misrata even as it sent Deputy Foreign Minister Abdelati Laabidi to Athens to discuss a way out of the conflict.

"How can you negotiate at the point of a gun?" he asked.

Abdulmelah said that Seif al-Islam had shown through his conduct since the uprising began on February 15 that his reputation as someone who wanted to change the regime from within was completely baseless.

"People thought he was a reformer but since the revolution began, he has shown his true colors. He is a carbon copy of his father."