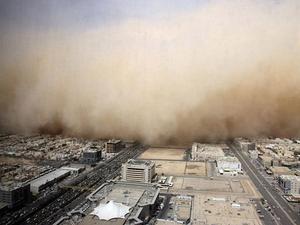 A blinding dust storm hit Kuwait on Monday forcing a halt in oil exports which an official said would not affect commitments to clients, while air traffic was completely halted.

A spokesman for Kuwait National Petroleum Co (KNPC) said oil exports were stopped and would resume when weather conditions improve.

"We have stopped crude exports at terminals and also receiving vessels. This however will not impact commitments to clients," Mohammad al-Ajmi told Agence France Presse.

Winds of up to 45 kilometers an hour reduced visibility to less than 150 meters at Kuwait airport and much less in the open desert.

Issam al-Zamel, head of operations at the civil aviation authority, told the official KUNA news agency that flights that were scheduled to land at Kuwait International Airport were being diverted to neighboring Gulf countries.

Kuwait has had little rainfall for the fourth winter in a row, making the desert sand loose and easily carried aloft by strong winds.

Dust storms are rare in winter but common in summer when the temperatures hit 50 degrees Celsius.